Better than a bullet being fired

Anyone paying attention to Apple this fall has surely noticed the new MacBook Pro models where the upper row of function keys is replaced by the new Touch Bar. Along with the disappearing function keys, the escape key also goes away. In many apps, the escape key will still exist as a virtual key on the Touch Bar, but for many people (vim users, heavy terminal users in general), this feels pretty weak. For much of the technology that springs from unixy origins, the escape key is pretty important, and having the physical key replaced with the butt end of a touch pad just seems wrong.

The International English keyboard is very similar to the standard US keyboard, but actually adds one extra key, next to the left shift key. The back-tick key, which is to the left of the 1 key, moves down bewteen left-shift and Z, and the key to the left of 1 features a couple of incredibly useless symbols that no one wants. You might be saying to yourself, “Useless, really?” To remove any doubts about the uselessness of this key, just see for yourself:

Come on, man. I could live to be a thousand and never find a use for either of those. This topic may require further research and complaining, but let’s not go down that rabbit-hole today. I’ll stop at saying that I have named this key Captain Useless. Now, let’s see what we can do about it. The following image shows the US keyboard above, and the International English keyboard below, and shows how a few keys are moved and where Captain Useless (outlined in red) is added: 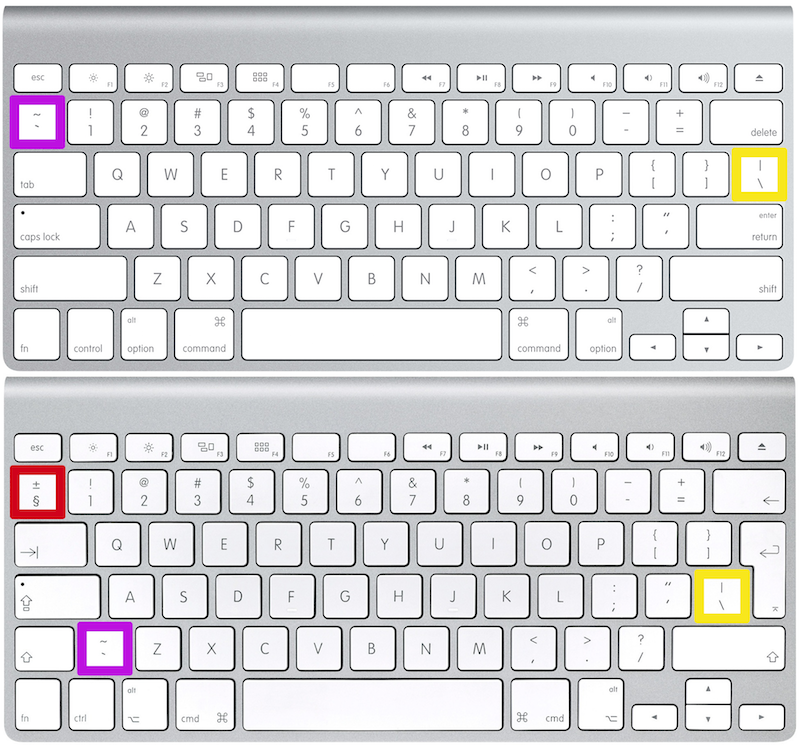 You’ll notice that Captain Useless on the International English keyboard, positioned where back-tick used to be, is located just below the escape key. If you’re like me, you might even occasionally hit that key when you mean to hit escape. So how about just changing that into an escape key? The best way I know to do this is with a Mac app called Ukekele, which lets you create your own keyboard mappings. It’s a little technical, and takes a couple minutes to figure it out, so I’ve saved you some trouble and created a modified mapping called Sweet Escape. This takes the form of an input bundle called SweetEscape, which contains a U.S. layout named U.S. Sweet Escape.

If you don’t want to mess around with Ukelele, you can just download the SweetEscape bundle, unzip it, put it in your /Library/Keyboard Layouts/ folder. If that seems like too much work, you can instead download Sweet Escape as a dmg file, which will open to reveal the keyboard input bundle and a link to the relevant folder. Just drag it over. In either case, you should then use System Preferences (under Keyboard, go to the Input Sources tab) to enable the new layout.

I don’t even have a new MacBook Pro with the Touch Bar yet, but I’m already using this layout on my previous MacBook Pro (which has an international keyboard) so that I can give some purpose to that useless key. Bye-bye, Captain Useless.